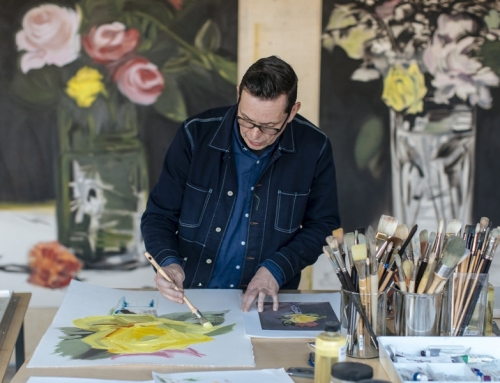 Tim Bavington me with flowers. With seven-foot bouquets of flowers, to be precise, smack-dab in the middle of two large paintings on the wall of his downtown Las Vegas studio. There are two more, somewhat smaller works in progress to the right, surrounded by studies. On tables and carts around is evidence of the artist’s process: the remote control for a stereo resting at the center of a palette, rulers, brushes of nearly every shape and size, a colorful model for his eighty-foot steel sculpture in response to Aaron Copland’s rousing populist Fanfare for the Common Man. The sculpture in real life, a landmark outside the Smith Center for the Performing Arts in Las Vegas, looks like tubes from a group of massive pipe organs, but in pinks, blues, yellows, oranges, and greens.

Bavington, is tall, agreeable, and easy going. He’d rather ask you questions than talk about himself, but he is quick to laugh and accents his points by widening his eyes. He tells me that the four canvases that struck me coming into the studio are his versions of paintings by Edouard Manet, some of the late, great artist’s last works. The largest of Bavington’s new paintings are four times the size of the Manets they reference. Bavington predicts that his ideas about color will influence how he finishes his reimaginings of Manet’s late still lives: “Our color today is completely different. I can’t even look at making big paintings like this without influence from our CMYK and RGB world. I’m using a palette very much the same as [Manet] used, but somehow I think they’ll evolve.”

Bavington’s process produces unexpected results and associations. Dramatic brushy roses and lilacs sit in sturdy glass vases against black or gray backgrounds. One of the canvases shows a red rose and a yellow rose in a champagne glass. The blossoms appear to push against each other and compete for space, the two looking embattled, stacked up, red on top of yellow, the red almost an outgrowth, an appendage of the yellow. Another canvas shows white lilacs on a black background; the enlarged lilacs could be a colony of birds taking flight.

As Bavington describes his process of working towards the level of realism and finish he wants, he compares painting to musical performance: “When I paint figurative paintings, I start work in broad areas. I paint these, and things are sort of fuzzy, then they come into focus. […] I can feel, as I am going through these, I’ll choose my own point at which to stop, and it might be that I like them a bit softer. They won’t be crisp reproductive copies of Manet paintings. It’s almost like reperformance. They’re like cover songs.”

This experience akin to re-performance of Manet in Bavington’s studio comes with a reminder of the relative directness and simplicity of these still lifes in relationship to the master’s oeuvre as a whole. Manet’s charming and immediate wet-on-wet renderings of flowers, asparagus, or a lemon—these amuse and intimidate the most accomplished painters, yet the groundbreaking modernist is still best known for the public controversy in response to his flattened forms and seemingly allegorical figures bluntly naked or clothed in contemporary urban dress, his collapsing together of physical, social, and gendered space, and the difficult-to-decode gestures and gazings of his often unidealized subjects.

Perhaps that’s why, with Manet, even in the still lifes, it’s tempting to look for drama. With any still life (known in French as “nature morte” or “dead nature”), as soon as it is set up, it begins to rot. After viewing Manet’s rendering of Maximilian’s firing squad, The Execution of Emperor Maximilian, a burst of flowers can look violent, the brushstrokes depicting petals somehow not unlike the brushstrokes depicting a plume of smoke from a line of rifles, a very different and very similar flourish of white. Viewed this way, Manet’s last still lifes are vigorous and lush, but their dark places could be read as threatening voids. It helps this interpretation that Manet was fading away as he was painting these portraits of “dead nature.” Eventually, he died from syphilis and rheumatism. The bouquets, perhaps sympathy gifts, were likely some of the final tokens he received.

Bavington’s re-performances of Manet’s paintings are not melancholy. Within our time, and through translation, the darkness in the background is not ominous, it’s just a different kind of space. More like a blankness in the way a computer screen is blank, the blank of possibility, like the rustle at the headwater of a mighty river or the whoosh of air accompanying an open portal in science fiction. Bavington’s former teacher at ArtCenter College of Design, the painter and critic Jeremy Gilbert-Rolfe described this condition in 1997. For Gilbert-Rolfe, as for Bavington, anything can happen in blankness. Blankness is eloquent. Gilbert-Rolfe wrote: “Garbo’s face may have been a tabula rasa, just as a sheet of paper may be seen to be empty, but not so the contemporary model’s face and not so the computer screen when it’s turned on. In both cases, one is in the presence of a blankness that is a mobility, active rather than awaiting action.”[1]

Bavington and I talk together about possibilities and the pressures of our time: to be original—probably not possible; to be right—probably that will only lead to being miserable; to be happy—possible if you’re okay with not being right. Eventually, we arrive together at how a strong and reliable source can become a plan for working that also allows for a certain freedom, an action and fullness in spite of, and because of, constraints. Freedom in reinterpretation, what leads to places perhaps unreachable if you have to create infrastructure entirely from nothing. Bavington explains succinctly: ”This is an armature in which I am completely free.”

Peculiar to these new paintings though, is that they seem to assert the importance of painting from observation without themselves relying on traditional practice of still life painting. He isn’t painting his own still lifes; he is painting versions of other paintings. He is mainly working from photographs and printouts. Through painting and photography, he is resurrecting another painter’s observations. The new pictures are funny. Odd, the way Andy Warhol’s paintings of soup cans are odd. Those cans and these flowers don’t need to be the subjects of big heroic paintings, but, strangely enough, here they are.

I ask Bavington how he feels about the relationship between painting and photography. Photography necessitates that painters continue to define painting, he asserts: “Now, I’m teaching students who all have camera phones in their hands, and it’s interesting to think about how painting relates to photography and how they can differentiate it for themselves as a mode of image-making. If they want to paint a realist image (most do), it’s imperative to learn the possibilities of painted pictures as distinct from photographic imagery that dominates their world. I agree with Wayne Thiebaud, who said in a recent interview that photography cannot be seen as interchangeable with painting because the camera sees with one eye, and we see with two.”

I can’t help but think that this combinatory, referential, and self-differentiating situation Bavington has set up is emblematically American, especially here in Las Vegas, where the collective aim is to roll many desires into one super-vacation experience. The interlocking casinos simulate New York, Venice, and ancient Egypt. Extra entertainment offerings include Michael Jackson or Beatles songs as the score for a circus, and the spectacle often becomes burlesque. When I ask Bavington if he thinks he is a bright-lights Las Vegas painter, he says that tourist Las Vegas is just the most explicit articulation of what America is and wants, and then he characteristically shifts the conversation to music, aligning himself less geographically and more with the punk, go-big-or-go-home, turn-it-up ethos of Elvis Costello circa 1978. I imagine I can hear the music playing in Bavington’s studio: “Pump it up until you can feel it. Pump it up when you don’t really need it.”

This particular musical inflection fits Bavington’s history. In addition to studying with Gilbert-Rolfe in Los Angeles, Bavington also studied with Dave Hickey at University of Nevada, Las Vegas (where Bavington and I both teach now). Hickey privileges the visual and mass cultural experience of art over linguistic or theoretical explanation. Writing about Bavington’s well-loved stripe paintings (precise geometric abstractions painted with sunny cool and nuance in series over many years), Hickey produces a particularly poetic if uneasy passage, making reference to visual art, music, sports, technology, and politics, and situating Bavington not as American—he was born and grew up in England—but as standing apart from and criticizing American indifference that cultivates a blasé, c’est la vie attitude, while also dancing with its complexities. The quintessentially American (or Las Vegan) ethos threatens to suck everything in, bloat it, and congeal it all together, concealing any previous uniqueness.

In 2006, Hickey wrote: “From Barnett Newman to the bar code, from Thomas Jefferson’s grid to the Nike swoosh, from the basketball court to the beach towel, from Duane Allman’s slide to the science of statistics, to be American—or to make things ‘look American’—has always been a matter of stripping away distinctions, of blurring them rather than specifying them. ‘Less is more’ in America translates into ‘the less distinct, the more inclusive,’ and Bavington’s paintings embody this nexus. The refinement of European modernism intersects with the amnesic ebullience of American democracy, and the question of ‘which is which’ becomes moot.”[2]

But why Manet? Why this European modernist? Why now?

“At some point,” says Bavington, “I don’t think you could live a life in painting without dealing with Manet. By virtue of stretching canvas and taking up oil paint, you immediately engage history. Right? You can’t help it. You’ve done it as soon as you start; there’s no escaping that there’s a history of painting when you start to make it.”

I think to myself: Manet was concerned with what we see, what we know, and how to communicate what we experience. These days, syphilis is curable. I imagine Manet here, alive with us, perhaps splitting the studio with Bavington, who, at fifty-two is the same age Manet was when he painted his flower still lifes. The two might listen to Lou Reed, The Allman Brothers, Sly and the Family Stone, and Elvis Costello. Had Manet been born in the 1960s, he might have lived past fifty-two. The bouquets he would have received would have shown up courtesy of Flowers.com. He would have lived to see his paintings copied into Simpsons cartoon montages and digitally printed on pillows. The executions he painted would have had to show drones, or at least laser aiming modules. And, had he lived in Las Vegas…

“The nice thing about working in Las Vegas,” says Bavington: “You can’t take yourself too seriously.”