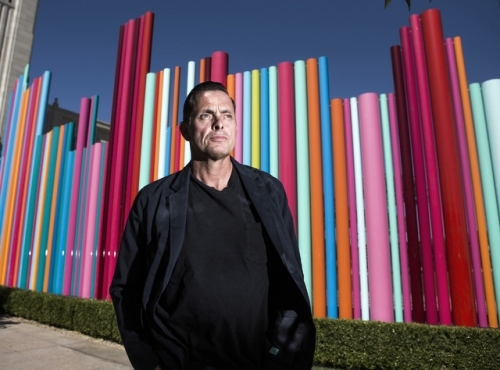 In 1985, Bavington moved to the U.S. to study art, graduating with a BFA in illustration from Pasadena’s Art Center College of Design in 1990. While at Art Center, he began practicing abstraction while studying with professors John Millei and Jeremy Gilbert-Rolfe. In the next decade, Bavington worked as a commercial illustrator in the entertainment industry, mostly on animated feature promotional campaigns, including the Simpsons franchise. In 1996, while still a full-time Matt Groenings’ Bongo Comics contributor, he was recruited by art critic Dave Hickey to enroll in the MFA program at the University of Nevada, Las Vegas, where Hickey, who by then had risen to nationwide fame following the publication of The Invisible Dragon and Air Guitar, was teaching art theory and criticism. Hickey took a retrospective look at the UNLV MFA program during the 1990s in the 'Las Vegas Diaspora' exhibition which he curated in 2007.

During his time in the program, Bavington began to explore opticality in art. By the end of his graduate study at UNLV he had formed his own brand of optical abstraction which combined an immaculate quality, characteristic to graphic design, with the awareness of the sensual properties inherent in color. This new work also relied on the synaesthetic potential of non-figurative painting—a trait explored by a string of 20th century artists from Wassily Kandinsky to Gene Davis.

While Bavington's formal approach to painting was the result of his training in the US, the content of his work owes a great deal to his UK upbringing. Bavington was born in Norwich in 1966, the year England won the World Cup and TIME magazine dedicated the entire issue to 'Swinging London.' Growing up England in the 1970s and early 80s Bavington was steeped in rock-and-roll music and everything associated with it. Music by The Beatles, The Rolling Stones, The Verve, Paul Weller, and later Oasis and The Darkness became the basis of his paintings (the latter band's song Physical S.E.X. from the album “Permission to Land” is the subject of his eponymous canvas, now in the collection of New York MoMA.)

In his monograph on historical and contemporary Op art, Joe Houston describes Bavington’s use of music in his contribution to the tradition of abstraction, and more specifically to stripe painting, that has been part of the abstract canon since Karl Benjamin’s and Lorser Feitelson’s work from the 1950s:

"Bavington devised a chromatic system that keys color to notes on the twelve-tone scale, with which he 'scores' his vibrant abstractions. This Postmodern reinvention of the Orphist endeavor results in a visual equivalent of rock and roll. Bavington eschews the presumed emotional connotations of color dating back to Goethe and instead conveys pitch, timbre, tone, and tempo through analogous alterations in the hue, intensity, value, and width of the stripes. The glissando of juxtaposed notes is also mimicked in the relative softness of his airbrushed edges. The grand scale of paintings like Little x Little (2003) heightens spatial and temporal experience, in which the ‘music’ unfolds in time ass the viewer walks in front of the canvas, invoking Gene Davis’s music-inspired notion of ‘an art of space intervals.’" (Optic Nerve: Perceptual Art of the 1960s, Merrill: London, New York, 2007, p. 160)

For all their conceptual sophistication, Bavington’s translations of the auditory into visual are both beautiful and accessible. Dave Hickey sees Bavington’s paintings as a refutation “to the post-modern myth that abstraction is an exclusionary, elitist practice.” “They prove” writes Hickey, “the reverse, and locate the idea of abstraction at the heart of democratic invention.” (Tim Bavington: Paintings 1998–2005, Steidl: Göttingen, 2006, pp. 16–21) In 2001, Hickey also referred to Bavington as a “thinking man’s Mod,” acknowledging that his generation lived through the Mod revival of the late 70s under the edict: “Clean living in difficult times.” The choice of rock-and-roll as the musical basis for Bavington’s painting is indeed logical because it anchors the artist’s work in the incorporation of modernist abstraction by popular culture. Not surprisingly, one of the key influences on Bavington was the work of revolutionary graphic designer Barney Bubbles. Bubbles appropriated visual modernism in his record cover designs such as the 1977 “Music for pleasure” album by The Damned featuring a spin on 1920s Wassily Kandinsky’s painting, and 1979 Elvis Costello’s “Armed Forces” that mixed visual references to Piet Mondrian, Jackson Pollock, Kenneth Noland and Bridget Riley.

After a decade of only working in 2D, following his 2000 graduation from the UNLV, Bavington expanded his work into sculpture. In 2010 he received his first General Services Administration Art in Architecture Award for a large-scale installation for the Otay Mesa Land Port of Entry between the US and Mexico. Although at the time the project was not funded beyond the design and development phase, in 2012 Bavington applied some of the research to another monumental public sculpture commissioned for the newly-built Smith Center for Performing Arts in downtown Las Vegas. Pipe Dream—a 28 foot tall and 80 foot long sculpture in automotive paint on steel, visualizes Aaron Copland classic “Fanfare for the Common Man.”

The following year, Bavington received a second GSA Art in Architecture Award for the Edith Green-Wendell Wyatt Building in Portland, Oregon. The completed aluminum and plexiglass sculpture “Louie Louie” is based on the song recorded by the Kingsmen and Paul Revere & the Raders at Portland sound studio Northwestern Recorders in 1963. In 2014 Bavington received a GSA Excellence in Design Award for the project.

He is currently working on the GSA Otay Mesa Land Port of Entry project that was finally funded for construction in 2019, and is scheduled for completion in late 2022.

The Magic Hour, The Convergence of Art and Las Vegas. Edited by Alex Farquharson, published by Neue Galerie, Graz, Austria, 2001.

Ultralounge, The Return of Social Space (with cocktails). Essays by Dave Hickey and David Pagel, published by DiverseWorks, Houston, TX, 1998.