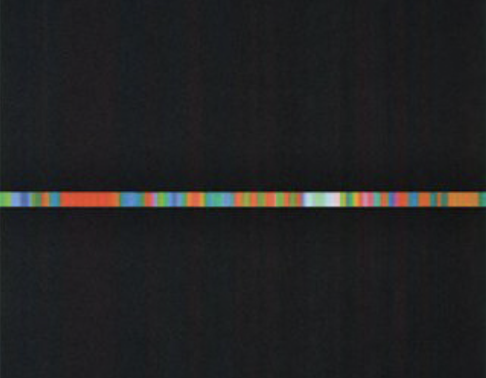 Many of Tim Bavington's vivid, dynamic paintings are visual translations of classic rock hits. The double-diamond shape of Hey Joe, for example, references the way Jimi Hendrix layered two different guitar tracks, one over the other, in the song of the same name. The repetitive slashes of Sound and Vision correspond to the minimal chord progressions of David Bowie's avant-garde anthem. You can almost hear Bavington's canvases reverberate with color.

When you learn that Bavington was born and raised in England and studied art in Southern California, you can't help but wonder if he's a rock star manqué. But as elementary as Bavington's conceit sounds, his paintings are as complex as the songs he chooses. His work reflects his intense fondness for midcentury painters Morris Louis, Barnett Newman, and Ellsworth Kelly, and their generation's love of jazz. Bavington's blithe crossbreeding of 1960s art with the music he listened to growing up in the '70s and '80s makes for a textured comment on nostalgia and personal history. It also demonstrates his fascination with transposing the aural into the visual, a pseudoscience that has seduced great minds since Isaac Newton.

Lately this fascination has given way to cheerful skepticism about the limits of such a project. "There's a correlation between color and sound waves, but trying to establish exactly what that is becomes a futile task," says Bavington, who has lived in Las Vegas for more than a decade with his wife, Kim, also an artist. For his recent canvases, executed with spray guns used for painting automobiles, Bavington begins with a simple structure and progresses toward abstraction—Get Happy is an Elvis Costello album cover rendered as a haze of colored blotches. The process is similar to the way a guitar soloist might take a simple melody and develop it into something more expressive and personal. His recent work also suits his more free-form impulses. "Any excuse to do what I want," he jokes. Spoken like a true rock star.

Download PDF
View More at www.elledecor.com
Back To Top