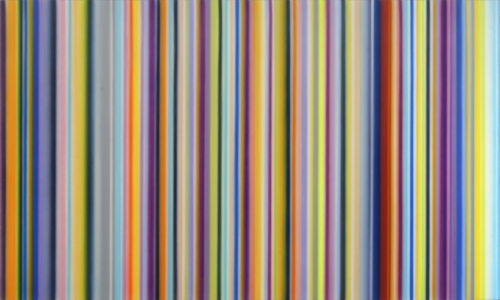 The L.A solo-debut by Las Vegas-based painter Tim Bavington keeps the recent push on abstract painting going full-tilt. His four gorgeous canvases at Mark Moore Gallery are a fresh and savvy reinterpretation of stripe paintings, here given an up-tempo musical spin. With the look of universal pricing codes on commercial packaging--except written large and in glorious Technicolor--the four unfold in a kind of formal narrative through the room.

First comes a small painting whose deeply beveled stretcher bars push the vertically striped surface plane way out from the wall. (Titled “All Too Beautiful,” it is.) Next comes “Science,” a large work whose scores of multicolored stripes are carefully matched up on the gray scale, which forms a horizontal bar that runs along the bottom edge. Third is an even bigger painting, “Lazy Sunday,” where the gray stripes are replaced with a cool turquoise band, which creates a breezy through-line for the hot rhythm of tropical pinks, yellows, oranges and magentas above.

Finally, the kicker: “Acquiescence II” is a 50-inch-tall diptych that runs more than 21 feet across the back wall. As the title might suggest, it’s a painting that grabs you by the lapels and pulls you over--then practically asks you to dance.

As with the other paintings, the vertical stripes are sprayed on in military-straight lines of varying widths. Sometimes the spray is high and tight; sometimes it’s loose and overlays the stripe adjacent, making for a retinal shift in hue or an optical sense of shallow space. The assumption is that one line was sprayed after the next, from side to side across the vast expanse, with incremental decisions made about what comes next and careful modulations added as necessary.

Whatever the case, the overall sense is of a complex orchestration of palette, bandwidth and composition. Linearity and color are as seamlessly, inseparably fused as horizontal is with vertical. The colors are lush--a typical sequence across a few inches goes persimmon, bright orange, tan, ochre, flame red, yellow, electric blue--with an optical fuzz between them. The far left end reads cool, the far right end reads blazing hot, but Bavington takes you all the way from icy blue to searing crimson without letting the vast, happily trembling surface in between devolve into chaos.

These are paintings about the joyful possibilities of painting. Bavington’s complex, sure-footed abstractions establish a sophisticated and luxurious universe.