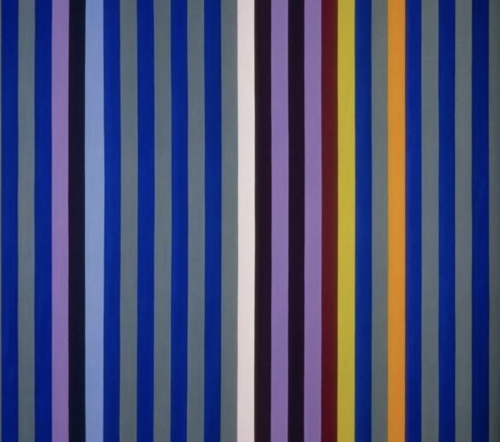 The stripe was an icon of the 1960s. It was the perfect structure for eluding the gestural paint strokes or drips favored by the preceding generation of abstract expressionists. Gene Davis, who died in 1985, was widely known as a painter committed to the stripe — more specifically, the vertical stripe. He used it like a rhythmic device.

The big Davis work on view at Scott White Contemporary Art is “Blue Sound” (1964), and its title underscores the idea of the stripe as the visual parallel of music notes or passages.

Every stripe is the same width, and Davis repeats colors, varies them and then repeats them some more. Scale works in its favor, too: The painting is nearly 8 feet tall and wide, giving the pattern a real presence.

“Blue Sound” is in a small, worthwhile exhibition, “Intervals,” whose theme might be phrased as “an old way of working gets a fresh life.” The painting by Davis is borrowed from the Museum of Contemporary Art San Diego, as is a handsome untitled work by the late Kenneth Noland, dating from 1960, which uses concentric circles as its motif.

It would make for a tidier exhibition to have a Noland stripe painting or one by Morris Louis on view, but the broader point the show illustrates is that this was a heyday of what is called color field painting. Its adherents embraced repeated pattern and strong attention to color. The “school” emerged in Washington, D.C.

This kind of painting fell out of fashion by the late 1960s, only to make a comeback in the last decade or so. A big nationally touring exhibition of Morris Louis’ work, which came to the MCASD in 2007, was a sign of renewed interest.

Another is found in the work of artist Tim Bavington, born and raised in England, who has a gotten a lot of attention for his version of the stripe or color field painting.

He’s not a reviver of this work so much as an adapter.

Bavington applies his colors with airbrush, which sets his work far apart from the seminal color field painters. His palette is vastly different, too: He leans toward bright, often electric, colors.

These hues evoke his adopted home: Las Vegas. He stayed there after graduating with an master of fine arts degree in 1999 from the University of Nevada Las Vegas and has built an international reputation for his work in the years since then.

Also central to his art: pop music. He takes riffs and entire songs, transposing the notes using a 12-tone scale to fit a 12-color palette.

The big Bavington on view, “Magic Pie” (2010), is 8 feet high and nearly 6 feet wide. Its greens, blues and reds shimmer. Vertical bands of color look as if they are dissolving into one another. And at intervals, narrow lines of blue, yellow, red and green slice vertically through the painting.

View More at www.sandiegouniontribune
Back To Top