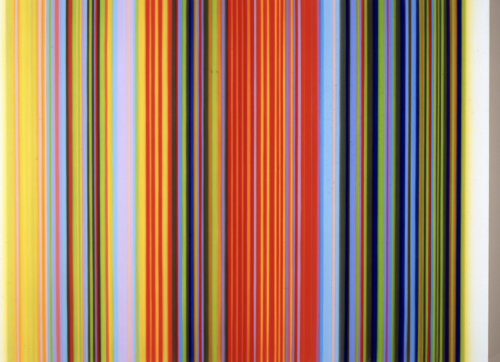 I think of Tim Bavington as a kind of bartender. Trained in Las Vegas, America’s speakeasy for broad definitions of aesthetic activity (where he was mentored and championed by resident aesthete Dave Hickey), he serves up exotic cocktails on canvas, which like all exotic cocktails, necessitate odd names. Bavington borrows his titles, such as Crossroad Blues and Aqualung, from songs and albums by classic-rock bands like Cream and Jethro Tull. Composed of vertical stripes rendered in unmasked, airbrushed acrylic spray on canvas, Bavington's latest paintings (all works 2002) balanced precision and fuzziness, premeditation and intuitive expression. Combining an incredible number of colors, these canvases somethimes were amazing recipes of subtle layering, and sometimes seemed more like suicide drinks. Either way, you were happy to be served by someone who understands indulgence: Their colors were crisp and distinct; yet they also constantly faded into one another, and you could sense where the painter fell into a groove and continued riffing on the same combinations, or chose to ditch the composition momentarily to add interest.

In the exhibition gallery, Crossroad Blues-Solo (After Cream) immediately commanded attention with its extreme horizontality (the work is roughly three feet high and twelve feet wide) pitted against vertical lines. Together these elements created the sense of something rushing by, teasing viewers to scan the sequence of alternating pinks, oranges, and lavenders, which was punctuated by a flash of mint near the middle and which ended at the far right with a shock of fuchsia and a parting gift of chocolate brown. The real scene-stealer was Aqualung (Solo). With its repeating sequences of spectrally ordered color bands—like bits of rainbows spliced into the composition—alternating with what seemed like the stripes from every ski sweater ever made, the piece enveloped you in six feet by twelve feet of rippling, pulsating color. Also included were two diptychs in which one striped canvas hangs above another: In Hey Joe (Solo), hotel-room pastels appeared above acid hues; a syncopated composition in Babe, I'm Gonna Leave You (Solo) surmounted another composition in which Bavington's bands were nearly metronomic—even in width and placement. Both these works suggested a promising direction.

There's little question that these paintings have a musical quality, as many abstract paintings do. I have my doubts about Bavington's rock'n'roll titles, which seem to be attempts to give the work an edginess that the stronger paintings don't need (and the weaker ones aren't going to get). I do, however, appreciate being able to call these works something more enjoyable than No. 1 or No. 2, and it's easy to imagine the paintings as spiritual channelings of good rock classics (although the canvases seem interchangeabe in this sense). What's more, the works, and their titles, reflect a younger artist's unapologetic aesthetic sensibility that includes pop, rock, and mod in its source material, not to mention Vegas Baroque and Marfa Minimalism, Dan Flavin, Kenneth Noland, bar codes, Bridget Riley, psychedelia, electronica, Ed Ruscha, test patterns, screen savers, Hang Ten T-shirts, Saturday Night Fever disco floors, and the communication sequences in Close Encounters of the Third Kind. And like that drink that didn't sound so good when you heard the ingredients but turned out to warrant another round, Bavington's paintings, at their best, show that even the funk and often-maligned spirits on which his generation was weaned make for fine cocktails when properly poured.

Download PDF
View More at www.artforum.com
Back To Top